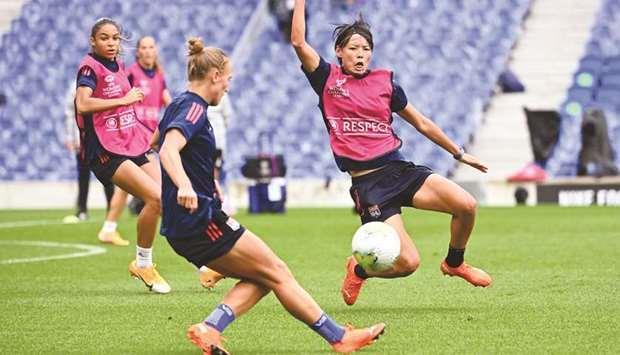 (MENAFN – Gulf Times) They are the two enduring heavyweights of the last decade in European women’s football, and today title holders Lyon and German contenders Wolfsburg meet in the Champions League final for the fourth time in eight years.
Lyon’s hegemony in Europe was supposedly under greater threat than ever before coming into the ‘Final Eight’, but the French club are now just 90 minutes away from winning the Champions League for the fifth year running, and for a record-extending seventh time overall.
But Wolfsburg have lived up to their billing as the most likely team to halt Lyon’s run, and are themselves now aiming to lift the trophy for the third time in their fifth final appearance.
It is a fitting occasion for the women’s game to be in the spotlight, although the coronavirus threat has ensured the match in San Sebastian will be played behind closed doors, just like the men’s final between Bayern Munich and Paris Saint-Germain in Lisbon a week ago.
The similarities do not go much further — if the two men’s finalists earned total prize money of around 80mn euros ($95m) and are expected to make around 130mn euros altogether once television revenue and other bonuses are added, the winner of today’s game will have made just 460,000 euros in prize money.
At least Video Assistant Referees will be available for the final, having controversially not been in use previously in the competition.
For years Lyon have served as a model of how successful a women’s side attached to a professional men’s club can be given proper financial backing, although rivals at home and abroad are gradually making life tougher.
They were crowned French champions for the 14th year running in May in a season curtailed because of the pandemic, and they recently won the French Cup for the ninth time by beating Paris Saint-Germain on penalties in the final.
Jean-Luc Vasseur’s team again edged out PSG in the Champions League semi-finals, with skipper Wendie Renard’s header making the difference in Bilbao. Prior to that they shaded Bayern Munich 2-1 in the quarter-finals.
‘I think my team is growing in strength, said Vasseur after the semi-final.

The Last Section That Will Allow Going from Puntarenas to Guanacaste

Vaccine breakthroughs are unleashing a ‘value rally.’ Here’s what investors should know

Lebanon’s Last Chance to Preserve and Create Jobs, is Now