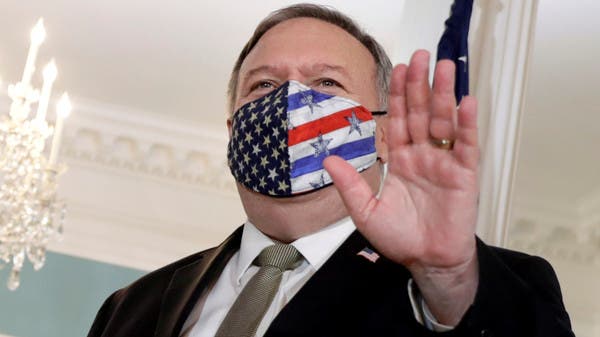 There are other Arab countries that will join peace agreements with Israel, and Washington will continue its efforts to create peace in the region, US Secretary of State Mike Pompeo told Al Arabiya on Sunday.

“I am very confident that other nations will join what the Emiratis, Bahrainis, and Sudanese have done and recognize the rightful place of Israel among nations,” he said in an exclusive interview with Al Arabiya. “They’ll do it because it’s the right thing to do for their nation, because of increased prosperity and security for their country.”

He added that this would not have been possible without the US’ leadership and engagement, and Washington’s role in “laying down the risks in the Middle East from the Islamic Republic of Iran.”

Thanks to Crown Prince @MohamedbinZayed for his hospitality. With the Abraham Accords, the U.S.-UAE Strategic Dialogue, and the upcoming opportunity to showcase American innovation at the @expo2020dubai, our journey to advance peace and prosperity will continue to succeed. pic.twitter.com/ONwOevak9Z

Pompeo added that while the US seeks to achieve peace in the region, it takes into consideration the danger posed by Iran, which countries in the region recognize as a common threat.

“The reality is that now the Gulf states and Israel recognized they have a common threat from Iran,” the Secretary of State said, adding that the US “would love for the Palestinians to engage with Israel [but] their leadership has rejected President Trump’s vision for peace.”

“Every country that wants a better situation for their own people will come along to recognize Israel,” Pompeo said.

The US’ policy toward Iran has not changed and has been consistent the entire time Trump has been in office, according to Pompeo.

“We’ve delivered on every commitment we’ve made to countries in the Middle East, we’ve protected Americans, we’ve built up partners who want to partner with the United States of America,” Pompeo said during the interview, adding, “there’s no reason that’ll change while President Trump is in office.”

He also confirmed that policies and duties will not change during the transitional period.

“My responsibilities don’t change. I still have a responsibility every hour, every minute, to defend the American people… and we’ll do that till the very last minute,” Pompeo said.

Pompeo visits Golan and West Bank settlements, first US secretary of state to do so

Pompeo says Europe, US need to work together to address Turkey’s Erdogan’s actions

Ariana Grande is president in new music video, and that’s a world we’d like to live in

Learn to build 20 different websites from scratch with this course