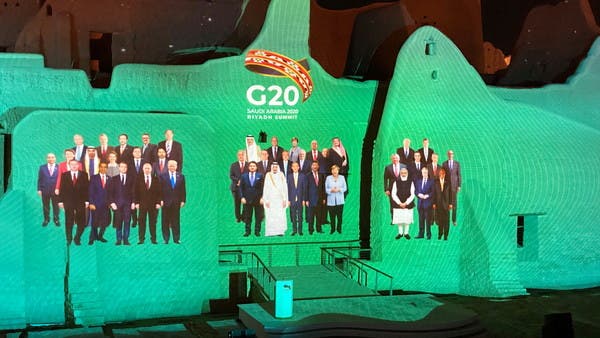 The Saudi G20 Presidency hosted a side-event meeting on Sunday on safeguarding the planet where Saudi Arabia and other G20 leaders emphasized the importance of the Circular Carbon Economy (CCE) approach and clean energy for a sustainable future.

Opening the session, Saudi Arabia’s King Salman bin Abdulaziz said the Kingdom has “big plans” for renewable energy, including wind and solar which will generate 50 percent of the country’s energy by 2030.

Japanese Prime Minister Yoshihide Suga affirmed the need for G20 to lead in making changes for a sustainable future.

“We, the G20 leaders, need to take the lead and work together as a team,” Suga said, adding that Japan aims to “reduce greenhouse gas emission to net-zero, and realize a decarbonized society.”

Watch live: G20 Leaders along with global organizations discuss the importance of the Circular Carbon Economy (CCE) approach during a side meeting at the G20 Leaders’ Summit. #G20SaudiArabiahttps://t.co/ZBPBlz2lqq https://t.co/OetZ12MPHi

Lawmakers in Japan declared a climate emergency on Thursday in a symbolic vote aimed at increasing pressure for action to combat global warming, after Japan last month committed to its firm timetable for net-zero emissions, according to Reuters.

Under international pressure to do more to address global warming, Chinese President Xi Jinping told the G20 that China would implement its own initiatives including achieving carbon neutrality by 2060.

“China supports deepening G20 coordination in reducing land degradation, conserving coral reefs, and cleaning up plastic from the ocean…let us work together for a clean and beautiful world,” Xi said.

US President Donald Trump also joined the session by sharing his administration’s contributions to creating a sustainable future, adding, “Together we can protect our environment, promote access to clean, affordable energy, and deliver a future of opportunity, prosperity, and hope for our nations all over the world.”

However, Trump also noted he withdrew the US from the Paris Agreement because it is “unfair” and “one-sided,” adding that it was not designed to save the environment but was meant to kill the US economy.