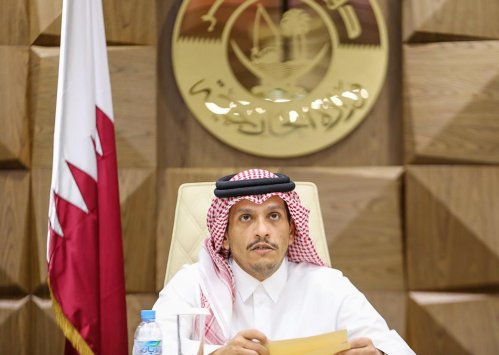 (MENAFN – The Peninsula) Doha: The State of Qatar renewed yesterday its continued solidarity with and support of the Afghan people in reaching national accord, and comprehensive and sustainable peace that regains the security and the stability the people deserve in order to guarantee honorable living following decades of fighting.

This came during the statement of the State of Qatar given by Deputy Prime Minister and Minister of Foreign Affairs H E Sheikh Mohammed bin Abdulrahman Al Thani, at a Security Council high-level virtual Arria-formula meeting on what the Security Council could do to advance the peace process in Afghanistan. The meeting was organised via video conference by Estonia, Germany, Indonesia in partnership with the State of Qatar, Finland, Norway, and Afghanistan.

The Minister of Foreign Affairs stressed the strength of ties between the State of Qatar and the Islamic Republic of Afghanistan, noting that the State of Qatar regards itself an international partner that is committed to supporting Afghanistan’s journey towards stability, peace, and prosperity.

He stressed that the State of Qatar maintains its firm position in supporting Afghanistan in regaining peace and security, which is a main component of Qatar’s foreign policy as the country has strived on providing support to enhance peace and security regionally and internationally, in addition to enhancing the settlement of disputes through diplomatic means.

He praised the efforts made by President of the Islamic Republic of Afghanistan H E Dr. Mohammad Ashraf Ghani to enhance state institutions, improve security, and pursue development in Afghanistan.

The Minister of Foreign Affairs thanked countries partnering with the State of Qatar for this importing meeting that comes at a pivotal moment in Afghan history in light of the peace negotiations taking place.

He said these efforts were crowned with a peace agreement between the US and Taliban that was signed in Doha on February 29 of last year, which was described by the UN Security Council in resolution no. 2513 (2020) as an important step towards ending the war and starting negotiations between Afghan parties.

The Deputy Prime Minister added that, despite the extraordinary circumstances imposed by the COVID-19 pandemic this year, the Qatari efforts continued and managed to help broker a cease fire in Eid Al Fitr and Eid Al Adha, in addition to the successful completion of  an exchange of prisoners by the Islamic Republic of Afghanistan and the Taliban Movement, as part of the agreement signed in Doha on February 29.

He said that these successes were a result of the State of Qatar’s real commitment to peace and security in Afghanistan with no agendas. He also noted that the peace agreement between the US and the Taliban Movement acted as an extra motivation to bring together the Afghan parties to the negotiations table. He added that the State of Qatar hosted in Sept. 12 Afghan peace talks, after which members of the Security Council issued a press statement thanking the State of Qatar for facilitating those talks. He highlighted the important role of the Security Council in supporting mediation as a successful tool for achieving peace.

The Deputy Prime Minister and Minister of Foreign Affairs Sheikh Mohammed bin Abdulrahman Al Thani said that the State of Qatar looks forward to the Afghan peace negotiations resulting in a comprehensive political settlement in Afghanistan that brings an end to violence and paves the way to unleashing the potential of the Afghan people and realizes their aspirations for sustainable peace, stability, progress, and prosperity. He stressed that this cannot happen without guaranteeing the rights and ensuring the active participation of all segments of the Afghan people, including women, girls, youth, and minorities.

He added that it was a pleasure to cooperate with members of the Security Council in supporting the Afghan Peace talks, along with countries like the Federal Republic of Germany, which partnered with Qatar in holding the intra-Afghan talks in Doha in July of 2019. The talks saw the participation of different segments of the Afghan society as well as political parties, civil society, and a strong participation from women.

He acknowledged that the Afghan people are the most capable of understanding the different aspects of the Afghan crisis and their interest, stressing that the peace process is led and controlled only by the Afghan party, with friends only looking to support that process. He then called on all Afghan parties to prioritize national interests and work towards building trust and accepting differences in order to advance citizenship rights to all of the Afghan people. He also stressed that the Security Council has a responsibility to support the Afghan peace process, and to create a suitable environment to ensure its success through the UN mission in Afghanistan and by supporting the current mediation and diplomatic efforts.

The Deputy Prime Minister noted that the Afghan people have made great progress in the fields of social development, freedoms, human rights, and democracy over the past two decades. He said that Afghanistan today is facing a critical stage that requires maintaining those gains and building on them. He added that the international community must provide the necessary support for Afghanistan in the humanitarian and developmental fields, in addition to providing expertise and other forms of support.

The Deputy Prime Minister and Minister of Foreign Affairs concluded by expressing hope that the 2020 Afghanistan conference set to take place next week will achieve its goal, praising the efforts of United Nations Assistance Mission in Afghanistan (UNAMA), and stressing Qatar’s continued support to it.