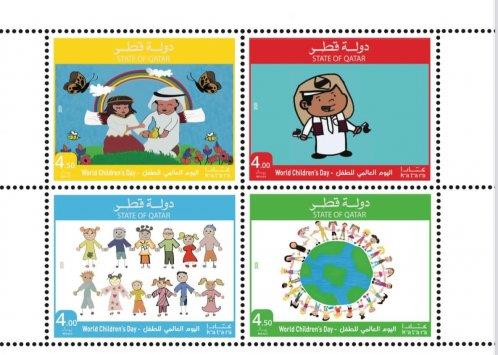 The new postage stamps contain the winning drawings of children chosen from among 572 entries submitted by 390 participants who took part in an art competition that Katara organized in cooperation with Qatar Post several months back.

The competition, which was opened to children aged seven to 14, witnessed participation from 46 nationalities including those from India, Egypt, Qatar, Syria, Pakistan, the US, Canada, Japan, Italy, Turkey, the United Kingdom, Indonesia, Kazakhstan and Sudan, among others.

Among the hundreds of entries, six winners were selected to receive QR2,500 each and four were selected to be printed on the postage stamps celebrating World Children’s Day which falls on November 20.

The drawings on the postage stamps to be launched tomorrow were created by nine-year-old Najla Al Dirham from Qatar, 11-year-old IIhem Boughanmi from France, 13-year-old Abdullah Yusuf Al Mulla from Qatar, and 14-year-old Simra Shamshad from India.

Representatives of the Qatar Philatelic Club and officials at Qatar Post will participate in the launch event to be held at Building 32 tomorrow. The Club, which was officially recognised in 1995, includes more than 300 amateurs.

The postage stamps will be a significant addition to the collection of Arab Postal Stamps Museum in Katara. Established in 2010 as part of the cultural activities for Doha Capital of Arab Culture, the museum boasts multi-themed stamp collections from 22 Arab countries affirming its important role in the field of philately and the history of the region.

World Children’s Day is celebrated on November 20 every year ‘to promote international togetherness, awareness among children worldwide, and improving children’s welfare according to the United Nations. It provides ‘an inspirational entry-point to advocate, promote and celebrate children’s rights, translating into dialogues and actions that will build a better world for children.

World Children’s Day takes on special significance for Katara, which directs programs and activities for children throughout the year aimed at developing their skills and honing their creativity, and celebrating this day represents the culmination of the Foundation’s continuous efforts in achieving the utmost welfare for the children.

Last year, Katara marked this global celebration by organising the three-day Katara Children’s Festival which included a number of cultural, entertainment and educational events as well as workshops, games, Arabic calligraphy, and children’s murals among others. One of the highlights of last year’s celebration was a painting competition entitled, ‘Qatar in the eyes of children organised in partnership with Qatar Post.