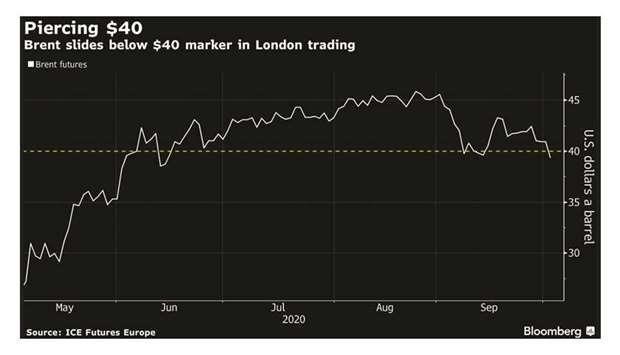 (MENAFN – Gulf Times) Oil tumbled to the lowest in more than three weeks after President Donald Trump said he tested positive for Covid-19, heightening concerns over an economic recovery.
Futures in New York plunged as much as 5.4% yesterday, before paring losses slightly amid renewed efforts in Washington to reach a deal on fiscal stimulus. So far, Trump’s symptoms were said to be mild. With Covid-19 cases flaring up from New York to London, Trump’s positive coronavirus diagnosis adds an additional degree of uncertainty during a resurgence of the global pandemic.
US job gains also slowed in September and many Americans quit looking for work, further highlighting the economic gloom.
‘It’s an ugly situation, said Bob Yawger, head of the futures division at Mizuho Securities. ‘Trump testing positive for the virus is a slap in the face for all the people who thought that the Covid situation was going to be a thing of the past.
Crude demand has been struggling to recover at a time when the Organisation of Petroleum Exporting Countries and its allies are sending supply onto the market. Russia raised its crude and condensate production last month, while Saudi oil exports jumped to a four-month high in September.
Meanwhile, UK Prime Minister Boris Johnson said he won’t hesitate to impose new restrictions as governments across Europe are tightening measures to battle a Covid-19 resurgence In the US, House Speaker Nancy Pelosi that she would work to find compromise with Republicans on a bill.
‘The increasing number of Covid cases worldwide is causing concerns about global demand, said Rob Thummel, a portfolio manager at Tortoise, a Kansas-based firm that manages roughly $8bn in energy-related assets. ‘The lack of stimulus at least for now is probably having an impact as well.
West Texas Intermediate for November delivery slid $1.24 to $37.48 a barrel at 10:33am in New York Brent for December settlement declined $1.41 to $39.52 a barrel after hitting the lowest intraday level since June.
Trump contracting the virus has sharpened focus on how the outcome of the election could impact oil markets, said Bjarne Schieldrop, chief commodities strategist at SEB AB. A win for Democrat Joe Biden could lead to a renewed nuclear deal with Iran and restrictions on fracking, Schieldrop said, potentially curbing future US crude output.
‘Trump and the coronavirus news, along with the setback to the talks on the US stimulus package, are just triggers and they’re serving as a reminder that the global economy is in trouble at least for the next six months, said Vandana Hari, founder of Vanda Insights in Singapore.
An expanding oil strike in Norway could cut output by 8% in western Europe’s biggest crude producer. The Norwegian Organisation of Managers and Executives (NOME) stepped up its industrial action this week after failing to reach an agreement with oil producers.
Troubled Singapore oil trader ZenRock Commodities Trading Pte. has started liquidating its assets after a local court issued a winding up order against the company earlier this week, according to a government registry and court documents.

Betting On Gold? Try This ETF

Trump Vs. Biden on Economies and Markets