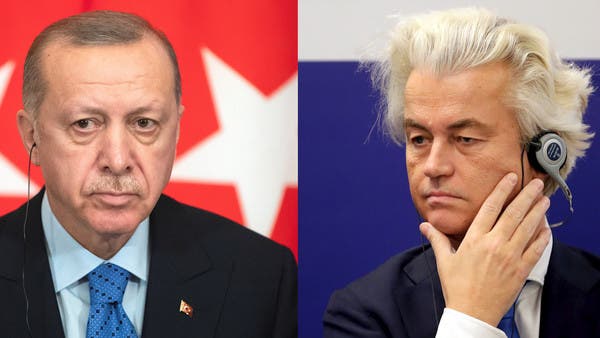 Dutch Prime Minister Mark Rutte on Tuesday weighed in a growing spat between President Recep Tayyip Erdogan and a Dutch anti-Islam MP, whom the Turkish leader has accused of defamation over a cartoon drawing.

Erdogan filed a complaint this week against outspoken far-right Dutch MP Geert Wilders, who shared a cartoon of the Turkish president wearing an Ottoman hat shaped like a bomb with a lit fuse on Twitter.

Turkish state agency Anadolu said Erdogan brought a defamation complaint before state prosecutors in Ankara against Wilders, who also tweeted the word “Terrorist” with the cartoon.

“I have a message for President Erdogan and that message is simple: In the Netherlands freedom of expression is one of our highest values,” Rutte said.

“This includes (being able to publish) cartoons, including of politicians,” he told the NOS public broadcaster.

“To lay a complaint against a Dutch politician which could lead to restricting his freedom of expression is unacceptable,” Rutte said.

Rutte said he was “speaking directly to the Turkish president” but that the Dutch objection will also be voiced through other diplomatic channels.

Rutte was one of the first European leaders to support French President Emmanuel Macron, whom Erdogan has targeted in a series of personal attacks and asked for a boycott of French products.

The call comes after Macron hardened his stance against Muslim extremists and robustly defended the right to mock religion, following the murder of a French schoolteacher who had shown his pupils cartoons of the Prophet Mohammed.

The complaint against Wilders “went beyond all limits,” Rutte said.

Relations between the Netherlands and Turkey have remained strained since the Dutch government in 2017 refused to allow two Turkish ministers to campaign for Erdogan among Turks of Dutch descent.

That decision, days before Dutch parliamentary elections were to be held in the Netherlands, angered the Turkish community who rioted in Rotterdam in streets around the Turkish consulate.

There are some 400,000 Dutch citizens with a Turkish background in the Netherlands.