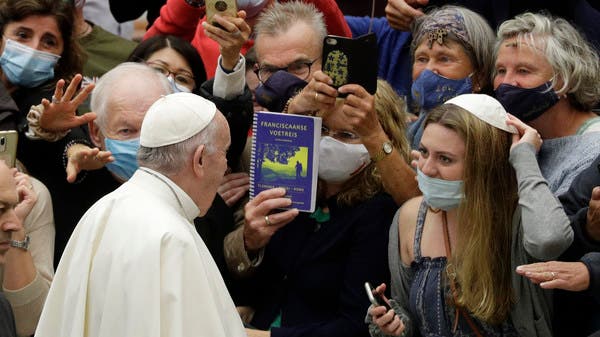 Crowd-loving Pope Francis promised on Wednesday to do better at keeping his distance from the faithful, after his relaxed attitude to virus restrictions raised eyebrows in recent days.

“Forgive me if I greet you from a distance,” Francis said at the end of his weekly general audience, held in a large Vatican hall.

“I would like, as I usually do, to come close to you and greet you, but… it is better to keep your distance.

“I believe that if all of us, as good citizens, respect the prescriptions of the authorities, it will help to put an end to this pandemic.”

The Argentine, who has rarely been seen wearing a mask since the virus first took hold in Italy in February, had been snapped by photographers several times in recent weeks joking with prelates who were also without masks.

The 83-year old, who had part of one lung removed in his youth, was also seen kissing the hands of newly ordained priests.

Francis said that as soon as he got near the faithful “everyone approaches and piles up”.

“The problem is that there is a danger of contagion. So, if everyone wears a mask and keeps their distance, we can continue with the audiences”, he said.

Four Swiss guards tested positive over the weekend, the Vatican said Monday, without specifying whether they had been in contact with the pontiff.

Three other positive cases have been detected in recent weeks among Vatican residents and nationals.

‘We have to remain because one day we may finally disappear’: Jewish Egyptians

Saudi, US talks to focus on strategic partnership between the two countries: FM

Israel says it will continue maritime border negotiations with Lebanon

All the best gaming laptops for levelling up

All the best Prime Day 2020 laptop deals in the UK