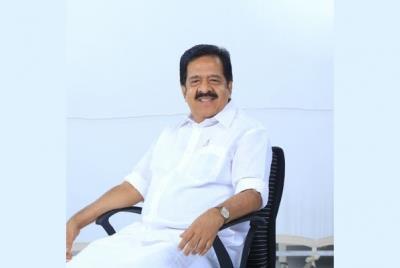 Thiruvananthapuram,, Oct 8 (IANS) With Covid protocols prevailing, leader of opposition Ramesh Chennithala on Thursday led a unique protest when he along with just four other leaders from the opposition walked a kilometre and arrived at the state secretariat to demand the resignation of Chief Minister Pinarayi Vijayan.

Following the spike in Covid cases, Section 144 has been clamped across the state and assembling of more than five people has been banned and, hence, Chennithala along with UDF convenor M.M. Hassan, and three leaders of the alliance — C.P. John, Shibhu Baby John and T.V. Ibrahim arrived at the secretariat. They shouted slogans demanding the resignation of Vijayan and called him a liar.

On Wednesday, the Enforcement Directorate filed a charge sheet in a PMLA court in Ernakulam into the money trail in the gold smuggling case. It was allegedly revealed that prime accused Swapna Suresh had met Chief Minister Pinarayi Vijayan six times in the company of now suspended top IAS official, M.Sivasankar, who was Vijayan’s secretary and also the State IT secretary.

Vijayan has all along maintained that he has no clue of who Swapna was and did not know of her getting a job in the Space Park of the IT department, which is headed by Vijayan.

Speaking to the media in front of the secretariat, Chennithala said Vijayan has lied.

“He has no moral right to continue as he is the one who has lied all the time with regards to Swapna Suresh. Now that he has been caught red handed, he should quit. Vijayan’s office is now a cover for the smugglers. Vijayan’s continuing in office is a shame for Kerala,” said Chennithala.

The charge sheet was filed under the Prevention of Money Laundering Act (PMLA), 2002 against P.S. Sarith, Swapna Suresh and Sandeep Nair in the District and Sessions Court (PMLA) in Ernakulam in the gold smuggling case. All three accused are in judicial custody since July.