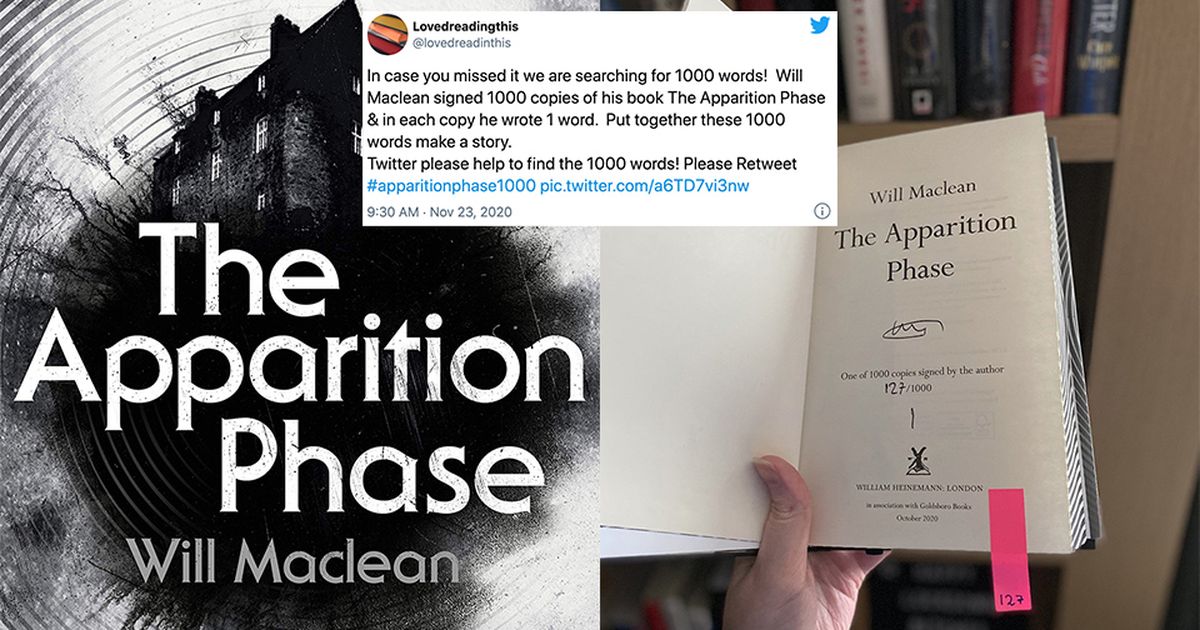 If you’re going to sign 1000 copies of your new book, you might as well make the most of that inevitable wrist ache.

Last month, writer Will Maclean’s debut novel The Apparition Phase was released into the world. To mark its publication, independent London bookstore Goldsboro Books released 1000 signed and exclusive first editions to members of their monthly book club. But rather than just putting his signature on each one, Maclean had another idea.

“On the title page, you’ll see a single word handwritten by me,” reads a note from Maclean distributed with each first edition. “That word, although meaningless on its own, is part of a piece of writing precisely 1000 words long.

“Each of these 1000 Goldsboro exclusive editions has one single word of that original piece written in them, dispersed among the people who own them. That piece of text is recorded nowhere else but, collectively, in those 1000 editions.”

Basically, Maclean has created a 1000-piece puzzle. And by late November, people were coming together on Twitter to try and solve it.

In case you missed it we are searching for 1000 words! Will Maclean signed 1000 copies of his book The Apparition Phase & in each copy he wrote 1 word. Put together these 1000 words make a story.
Twitter please help to find the 1000 words! Please Retweet#apparitionphase1000 pic.twitter.com/a6TD7vi3nw

To make things trickier, all the words probably aren’t in play yet. Mashable spoke to Goldsboro Books, who confirmed that although all 1000 copies of Maclean’s novel have been claimed, some of them are still in the process of being dispatched. And with some going overseas (and postal delays due to coronavirus expected), it may still be a little while before everyone has received their copy.

In the meantime, though, readers and book bloggers are slowly putting all the pieces together.

Still talking about The Apparition Phase, we have over 70 words now, but still lots more needed. In the signed @GoldsboroBooks copy of the book, is 1 word, 1000 signed copies = 1000 word story.
Helps us collect the words.
Please Retweet. Thanks pic.twitter.com/1HFqp7DRNc

Maclean, meanwhile, has been watching from the sidelines and occasionally chipping in to help clear up any handwriting-related confusion.

Apologies for the handwriting! This is what “and” looks like when you’ve written in 938 books

With only around 100 words confirmed at the last count, there’s still a way to go. But with Twitter’s strong track-record in solving mysteries through the power of crowd-sourcing, it’s surely just a matter of time.

Apple Watches are on sale for Black Friday, but deals are fleeting

Take an extra 20% off these air purifiers this weekend